"The Amazon of the Seas"

More than 500 corals and 2,500 coral reef fishes are said to live in the triangular waters surrounding the Philippines, Malaysia, Indonesia, East Timor, Papua New Guinea and Solomon Islands. The coral triangle is a treasure trove of various marine organisms and is also called an ocean amazon because of the plentiful phytoplankton that bathes in the intense sunlight directly under the equator and generates oxygen. It is currently an area in need of protection for the global environment alongside with the Amazon forest, which is said to generate 1/6 of the oxygen on earth because of the large amount of oxygen generated. At the same time, valuable marine resource protection projects are presently in progress under the management of the Coral Triangle Initiative and WWF etc. The area surrounded by the red "Boundary" is the currently protected area. 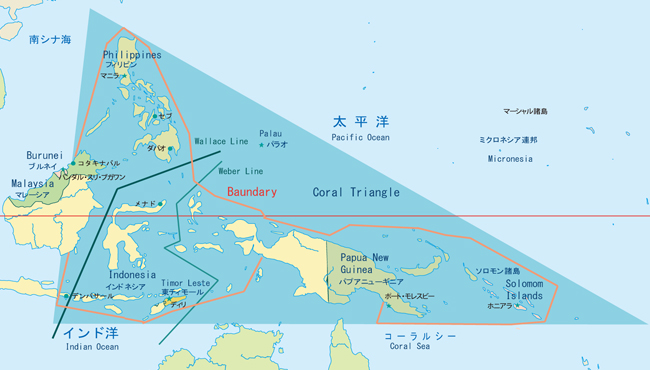 The Coral Triangle is said to be an area that holds the world's richest marine ecosystem. Over the years, the complex ocean current of the coral triangle and the ocean bottom topography have bred a plethora of creatures. In addition, divers worldwide are pouring into these areas where they can meet the most diverse of organisms.
The tropical coral reef fish evolved and diversified around islands surrounded by coral reefs and also around the coral triangle with many atolls, it is said that it moved to the Pacific islands and settled there. Two hundred million years ago this place was called the Tethys Sea and it was a few shallow shores just directly under the equator. Also, 20,000 years ago during the ice age, the sea level is about 100 meters lower than the current one, in addition the place that lies on the big straits that bisects the land masses of Australia, Papua New Guinea and the land masses of Southeast Asia is called Wallacea.
It is the Wallace Line that divides the biota of the Australia ward called Sundaland and the Sahul Shelf in the oriental district into two, dividing the biota between Borneo and Celebes and between Bali and Lombok. In terms of mammal’s distribution, elephants inhabit the island of Borneo. Although there is no huge carnivorous mammal on the Australian land mass of the Sahul Shelf, it is famous for many marsupials and terrestrial birds that resides there. On the other hand、the east side of the Wallace Line is also a Weber line that is divided into two based on differences in the distribution of shellfish and mammals. is not about which of the two lines are correct, it is that there are different kinds of creatures in the east and west, and it is a sign showing the biodiversity in the surrounding area. Currently not only on land, but also in the waters, the coral triangle are scattered almost all over the earth, deep trenches and islands of tropical rain forests just under the nutrient-rich equator. It is also said that the flow of different nutrients from Sundaland and the Sahul Shelf also contributes to the diversity of the reefs. Geographically, the ocean current flows are rather complicated among many islands that centered on volcanic islands. in addition, it also forms a complex ocean bottom topography. The types and population of coral and coral reef fish are precious treasures that the earth has made. Regretfully, It is said that this sea ecosystem will disappear within 100 years unless thorough environmental protection is taken. 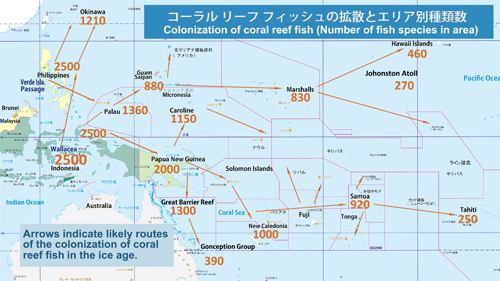 Protect ”Coral Triangle”！ : The global center of marine biodiversity!
The numbers in the chart above are one of the survey results of the number of types of coral reef fish around the Pacific islands and their diffusion. 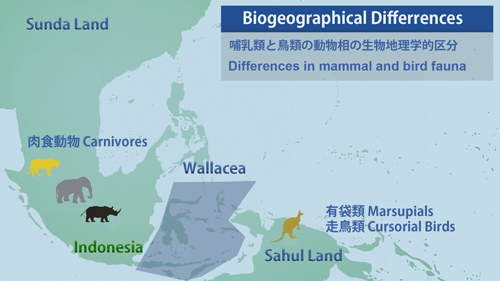 About 15,000 years ago, the lake of the ice ages was about 95m lower in sea level than the present, and so the diversified creatures moved onto land. This is also why elephants live on the present day Borneo Island.The Bali tiger also inhabited Bali until about the 1940s. Interestingly, Marsupials such as kangaroos inhabiting the Sahul Shelf were able to expand their habitat without encountering the tiger.The ocean waters between Sundaland and Sahul Shelf, which is called Wallacea (named by Wallace) is the current coral triangle. It is said that the current reef fish in this area has evolved and diversified around the islands. Coral reefs such as the Great Barrier Reef and the New Guinea Barrier Reef in the vicinity were said to have developed over a long period of time, due to lack of change in the coastline from Wallacea to the west coast of Australia. When the Ice age finally ended 10,000 years ago, Murray, Sumatra island and Borneo island are separated by the rising sea level while Sundaland disappears. The coral of this coastal coastline is shallow the day it became part of the ocean, since the ocean here are shallow, the corals are not relatively diversified compared to Wallacea and the northern and eastern part of New Guinea. This series of coastline fluctuations is said to contribute to the diversification of coral triangle living organisms. Also, regarding terrestrial organisms, Indonesia has the world's largest lizard comodo dragon with the tail longer than the comodo dragon in terms of body length, and grows to about 5m in length, and many other endemic species such as the lizard harp butterfly keeps a variety of ecosystems. The surrounding area of Wallacea, now called the Coral Triangle is said to be the most abundant and with more biodiversity hotspots than anywhere else in the world. 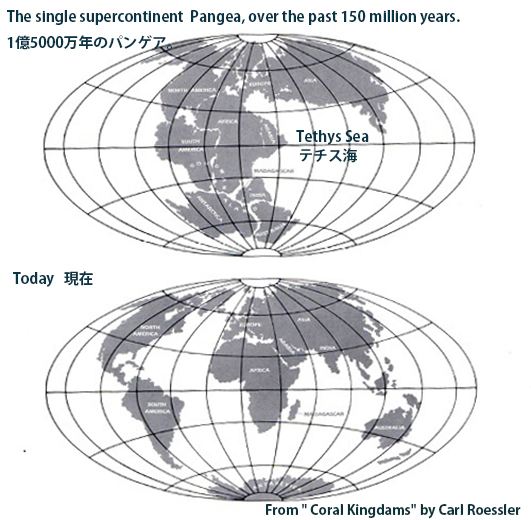